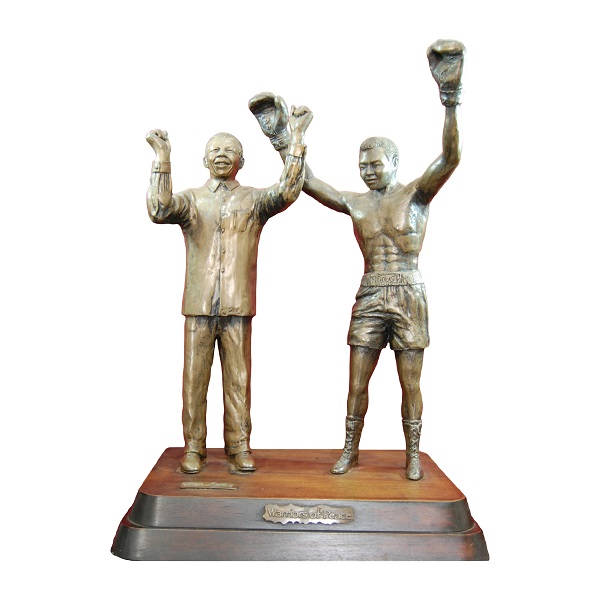 Nelson Mandela has been a continuous inspiration to millions of people around the world, having defied reason, logic and all expectations to free a nation that was destined for internal conflict. By example he brought relief to the disadvantaged, and dignity and respect where there was conflict and suppression.
Muhammad Ali - in the artist's mind is the greatest boxer of all time - said about his life after boxing that his most important job now was trying to teach people to treat each other with dignity and respect. He is still held in awe by boxers and fans around the world, and he still continues to inspire greatness, dignity and respect.
This limited edition sculpture is a depiction of Nelson Mandela as a Warrior for Peace alongside arguably the greatest boxer of all time, Muhammad Ali. "Warriors of Peace" depicts Nelson Mandela and Muhammad Ali in a victory pose. The "Warriors of Peace" sculpture is part of a limited edition of 44 cold-cast bronze casts. 6 out of 44 have been acquired including one by Nelson Mandela. 38 of the "Warriors of Peace" limited edition remain to be sold.

Online Art Gallery
VIEW OUR COLLECTION OF SCULPTURES FOR SALE
Are you looking for a unique custom trophy or gift for a special occasion?
Want to know what we're up to? Receive our newsletter!
Back to content