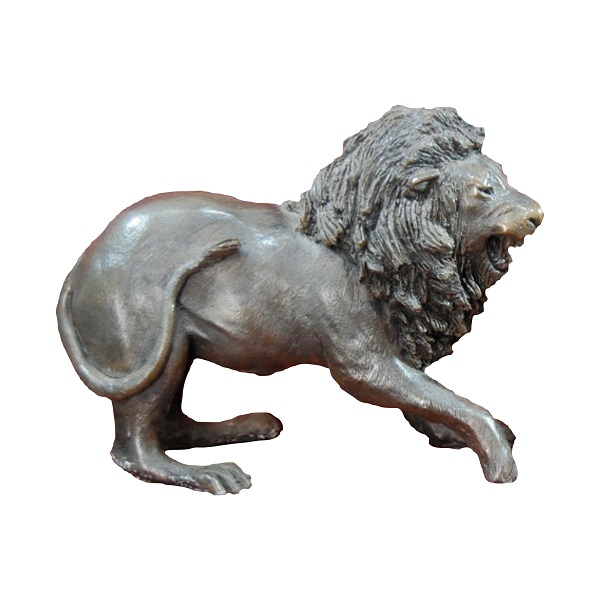 The lion, since early times, has been one of the best known animals of the wild, but their numbers have dwindled to a few tens of thousands with several subspecies having died out. This large, powerfully built cat - being rightly called the “King of Beasts” - protects its pride from its vantage point; a rock.

Lion on a Rock Sculpture Description

Size: 18cm height x 17cm width x 13cm depth.
Weight: 2.2kg
Finish: cold cast bronze.
Other materials available: we can also cast the sitting lion statue in other metals including aluminium, brass, copper, or mixed metal finish; at varying costs.
Optional extras: although the lion sculpture comes with a base, in the form of a rock, we can also mount it on a wooden base as well as have a specially made plaque engraved for an additional cost.
Place an Order
R 1,700.00(VAT incl.)
ADD TO CART
This is for order requests only. You do not make any payment at this stage.
Other Sculptures You Might Like
Statue For Sale: The Cheetah
Size: 13cm height x 19cm width x 17cm depth

Material: The Cheetah sculpture is made in cold cast bronze. You can also purchase it in other materials at varying prices: aluminium, copper, mixed metal finish.

Material: The Lion and Lioness sculpture is made in cold cast bronze. You can also buy it in other materials at varying prices: aluminium, copper, mixed metal finish.
R 4,400.00(VAT incl.)
ADD TO CART
Online Art Gallery
VIEW OUR COLLECTION OF SCULPTURES FOR SALE
Are you looking for a unique custom trophy or gift for a special occasion?
Back to content